After much anticipation, the 2017 UNESCO peace conference date actually came. From Taipei, I flew to Paris, France with a group of about two dozen members of Hwadzan and other travelers keen on attending the peace conference. Ever since I had started working as a Mandarin interpreter in 2011, I had dreamed of one day working for United Nations or UNESCO. I had never attended a peace conference before, let alone on a platform so great as UNESCO. I had high hopes for this event, and what I experienced exceeded my expectations.

The United Nations Educational, Scientific and Cultural Organization (UNESCO) is a specialized agency of the United Nations aimed at promoting world peace and security through international cooperation in education, the arts, the sciences, and culture. The UNESCO constitution preamble states, “Since wars begin in the minds of men, it is in the minds of men that the defenses of peace and the conditions for sustainable development must be built.” This phrase is perfectly in line with the Chinese classic, The Book of Rites, where it states, “Education is the priority in establishing a country and leading its people.” (建國君民，教學為先) This was just the first of many nuggets of wisdom from the classic Chinese texts I would hear about over the three days of the conference.

Conference Day One: A King Who Loved His People

On day one of the conference all of the UNESCO ambassadors and speakers paid tribute to the late King of Thailand, King Bhumibol Adulyadej, for his work in creating a sustainable society of peace; the king had passed away on 13 October 2016. The king reigned for more than 70 years and his many Royal Projects helped millions of Thais living in rural areas improve their lives, through education, sustainable agriculture, improving the economy, and more. The speakers praised the king for his focus on moderation and the promotion of morality and ethics in education. The king was steeped in the ancient tradition of Theravada Buddhism and applied its teachings to governing Thailand. He proposed for politics the Buddhist principles of the righteous king and sufficiency economy principles, both of which are taken from the Buddha’s teachings and applied to today’s problems.

The king worked tirelessly for decades visiting rural areas of Thailand to help the poor improve their lives. He spent a lot of time with the sick and eventually became sick himself because of this. Despite becoming sick he continued visiting the sick Thai people until one day he got so sick that he passed away. The Thai people always say, “We may not have the best country in the world, but we have the best king.” In Bloomberg News’ 2017 Misery Index, Thailand’s unemployment rate was only 1% and was therefore ranked the world’s happiest nation. This was the third time in a row Thailand had won this title; it is no doubt thanks to king Bhumibol’s contributions. To read more about what made King Bhumibol so sagacious, you can read my recent post about him here.

An Antidote to Mental Pollution

In a sense, Buddhism was the king’s playbook when it came to governing his kingdom. One speaker, a film producer from Austria named Titus Liber, presented some multimedia projects that explained who the Buddha was and what he taught. One project is called Borobudur: Paths to Enlightenment, which is a visualization of the biggest Buddhist temple in the world, the Borobudur in Indonesia. The visualization allows users to explore a 3D model of the temple, to examine its reliefs within the temple wall that tell the story of the Buddha’s life. 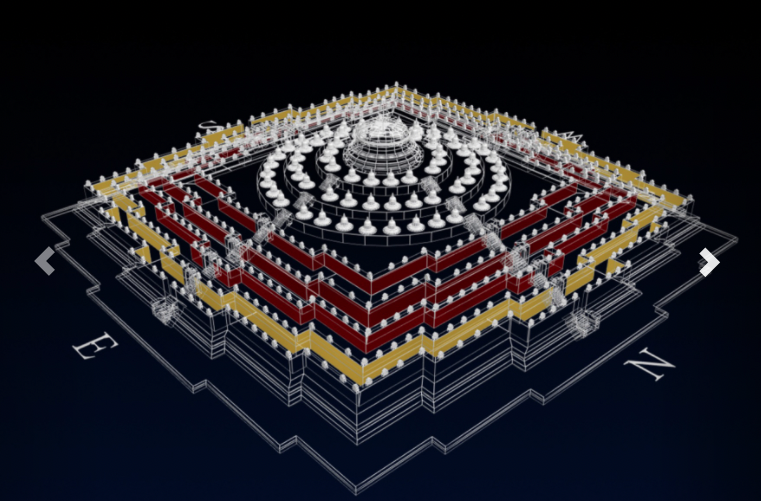 Liber mentioned that the real problem of today’s world is not climate change, it is the thoughts people are having—the mental pollution. Buddhism could be the antidote to cleaning up this pollution. In Liber’s own words: “There’s probably no better path than the Buddhist path to work towards an ecology of the mind, an ecology which takes care of how we perceive things, not only how we do them, but how, according to Buddhist teachings we perceive and we conceive ourselves and our actions, because action is only coming after we perceive things within.” 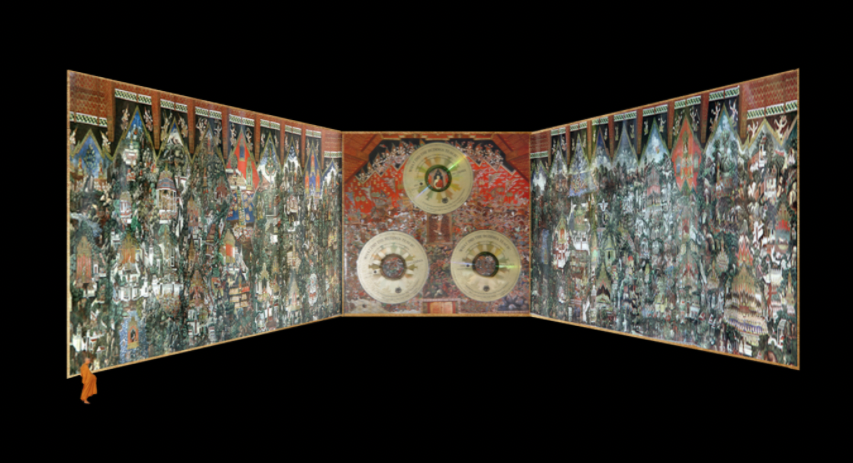 Temple of the Emerald Buddha

On the second day of the conference, ambassadors, professors, and religious and business leaders from around the world spoke about the troubles besetting our world today–climate change, war, poverty–and how we can solve these issues. What I remember most was hearing about all of the contributions the ancient Chinese had made over the years to promoting world peace, as evidenced by the speakers below. 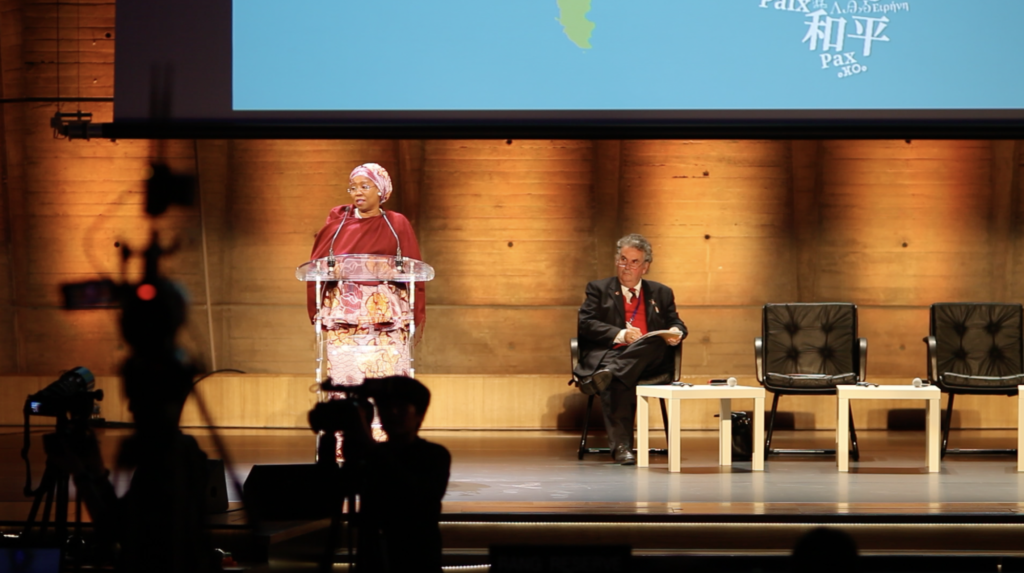 Professor Yuli Liu spoke about the critical role that having a harmonious family plays in creating a harmonious world. A person who has conflicts with their parents or siblings will eventually have conflicts with others. By fostering love and respect between parents and siblings, one will be able to extend this love and respect to others. The foundation of traditional Chinese culture is filial piety, of all the virtues it is the most important. The Chinese character for filial piety is 孝 (xiào). This character is a compound ideograph consisting of an abbreviated form of the character for “old” (老, lǎo) on top and the character for “child” (子, zǐ) on the bottom. When combined they mean that the young and the old generations of the past and future are one entity. This is why the ancient Chinese place importance on remembering ancestors. Confucius said, “Let there be careful attention paid to performing the funeral rites of parents and let them be commemorated with ancestral remembrance ceremonies. Through this, the people will recover their innate virtue.” (慎終追遠，民德歸厚) If a person can always keep their ancestors in mind they will be able to look up to their parents as well as the parents of others. The Analects of Confucius also says, “All people in the world are our siblings.” (四海之內，皆兄弟也。) 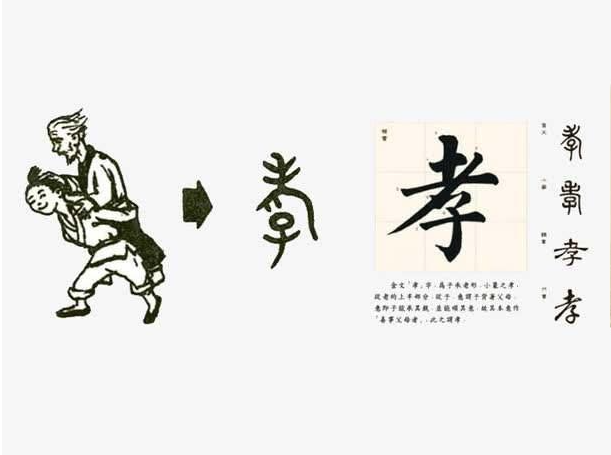 The etymology of the Chinese word for filial piety. Photo from Sohu.com

Master Chin Kung spoke about the importance of religious education including morality, ethics, and causality education. He cited teachings from the world’s sacred holy texts in his talk. Buddhist sutras say, “Be filial to and provide for parents, be respectful to and serve teachers.” (孝養父母，奉事師長) Taoist texts say, “Accumulate virtues and merits, be compassionate towards all living beings.” (積功累德，慈心於物) Causality education refers to the law of cause and effect: good deeds bring about good consequences and bad deeds bring about bad consequences. Confucian classics state, “Good deeds turn into abundant blessings, while evil conduct results in myriad misfortunes.” (作善降之百祥，作不善降之百殃) The Bible says, “His evil intent recoils upon his head, his wicked design comes back in his face.” 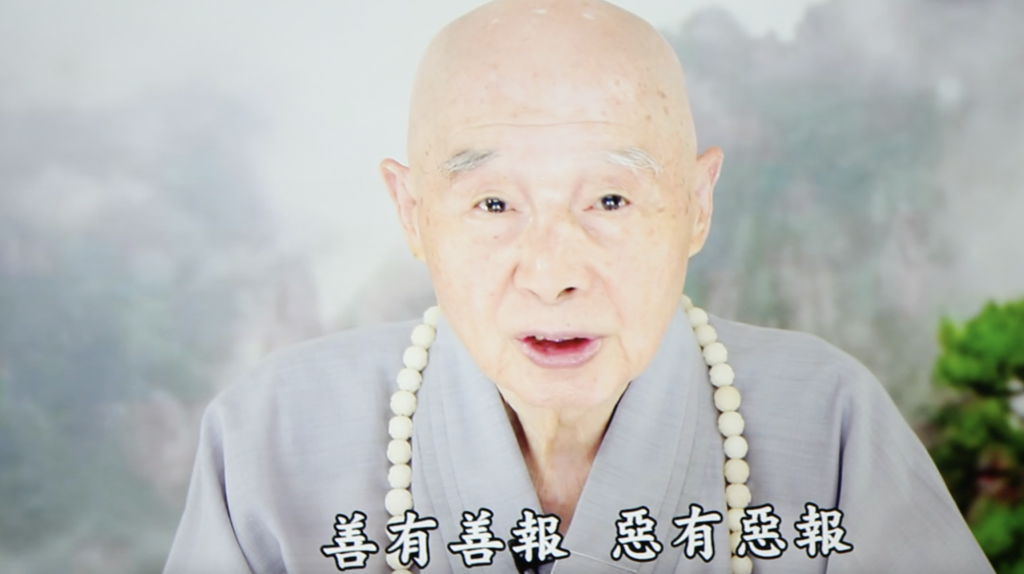 I loved seeing all of the different religions represented at the conference. No one religion is better than any other, they are each the best. Though they take many forms and speak many languages, the religions are all the same wisdom.

Master Chin Kung has been speaking at UNESCO conferences since 2005, reporting on successful peace projects he has implemented. Most recently, Master Chin Kung has worked with leaders in the town of Toowoomba, Australia to establish a model city of peace and harmony. In the spring of 2017, UNESCO ambassadors traveled to Toowoomba to experience for themselves this model city. What they witnessed was a land of many cultures and religions where each group of people gets along harmoniously with every other group and people are respectful, open-minded, accepting, and curious about others. The below video documents their visit to the city (the video is in English).

As they were very impressed, the UNESCO ambassadors arranged an office for the Venerable Master at UNESCO headquarters in Paris. Known as Master Chin Kung’s Friends at UNESCO, the office is a collaborative platform for people who want to create world peace. This year’s peace conference coincided with the opening of the office. 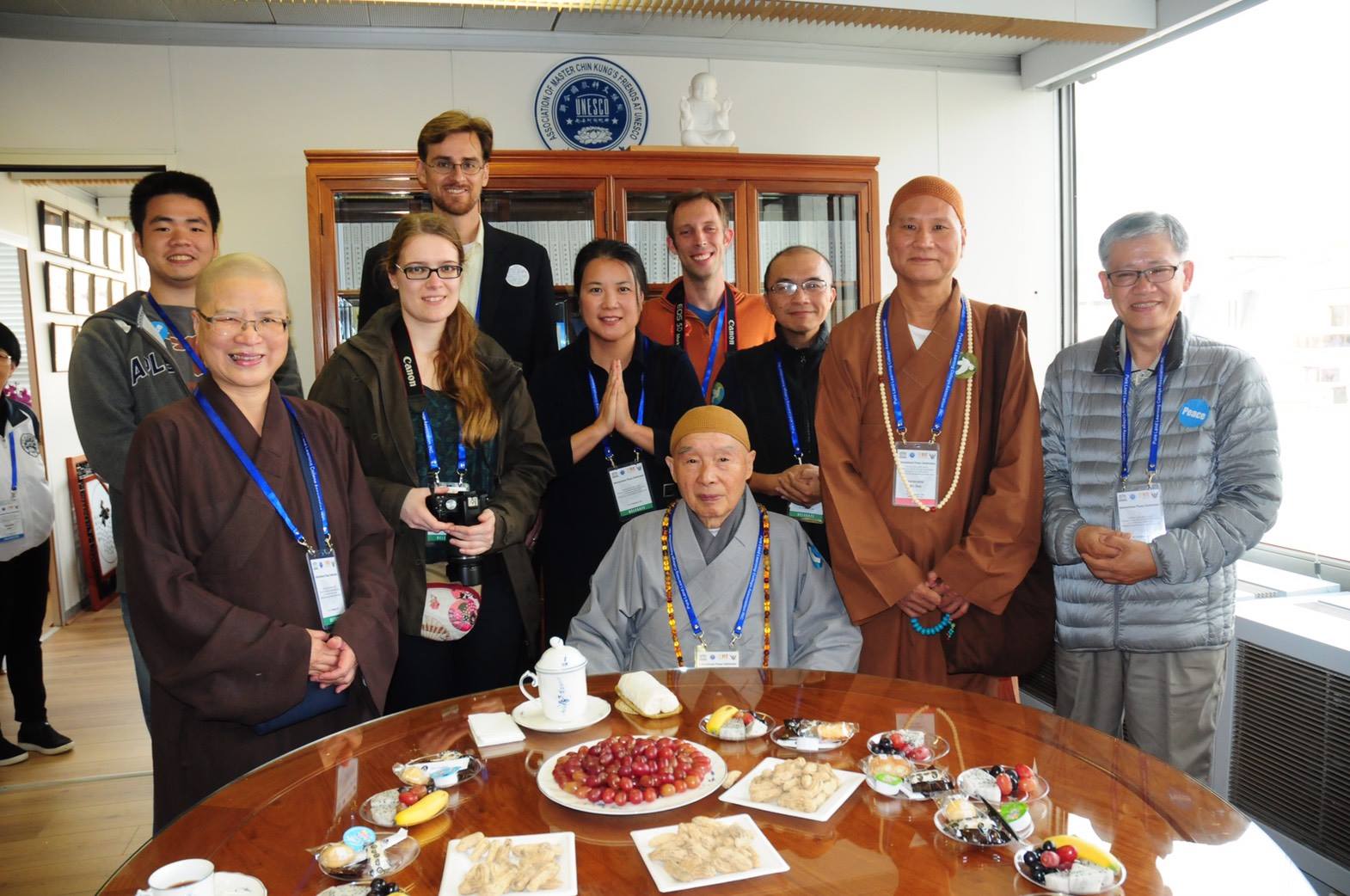 On the third day of the conference, a traditional Chinese ancestral remembrance ceremony was held. The purpose of such a ceremony is to help us remember and pay respect to our parents, grandparents, and ancestors, and in doing so cultivate a respectful heart so that we can treat all beings with respect. 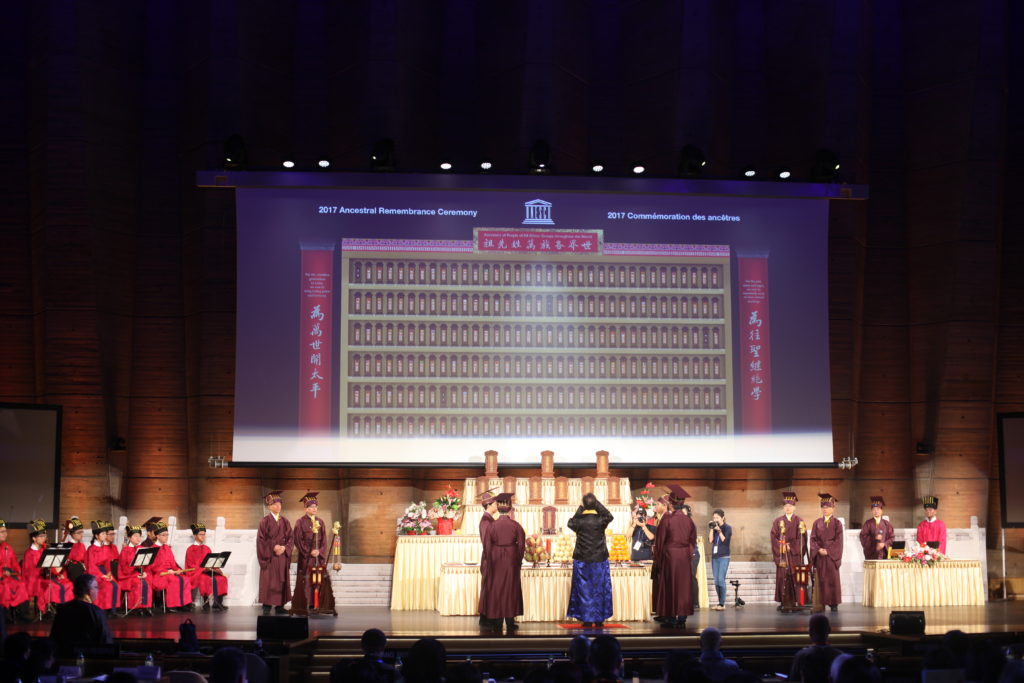 There were a few hosts who facilitated the entire ceremony. The pace of the ceremony was very slow and solemn, every action was done with great focus and intent. There was a small band playing traditional Chinese instruments, a bell, and a drum used in the ceremony. The reason for the slow pace seemed to be to put everyone in a reverent and reflective mood. The ceremony made me think of my own parents and ancestors, without them I would not exist. Below is a video from the 2019 UNESCO peace conference ancestral remembrance ceremony.

On the last day of the conference we viewed a video called Water Knows about the memory of water. The Hwa Yan Laboratory, a lab established under the guidance of Master Chin Kung in 2010, carried out the same series of experiments done on water by Dr. Masaru Emoto, described in the book The Hidden Messages in Water (2005). Glasses of distilled water were exposed to thoughts, smells, sights, and sounds, and then the water crystals were observed under a microscope. Different water crystals formed based on what the water had been exposed to. For example, water exposed to the word “love” in different languages had beautiful water crystals. Water exposed to cigarette smoke had ugly water crystals. Below are some of the water crystals which were viewed and what they had been exposed to. Water is everywhere, in our bodies, in the air, and in the food we eat. It is amazing to think about the affect we have on this water and our immediate environment. 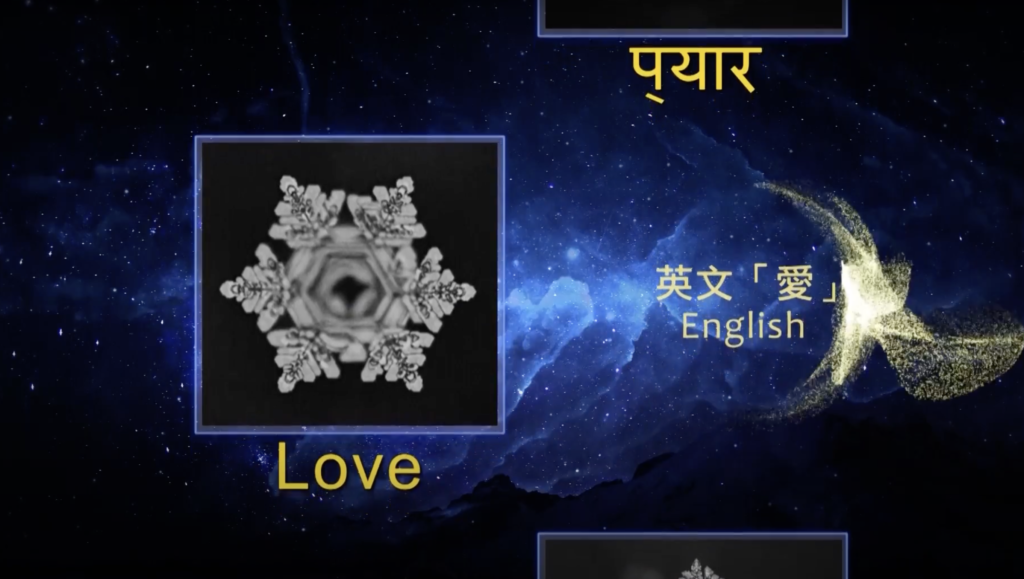 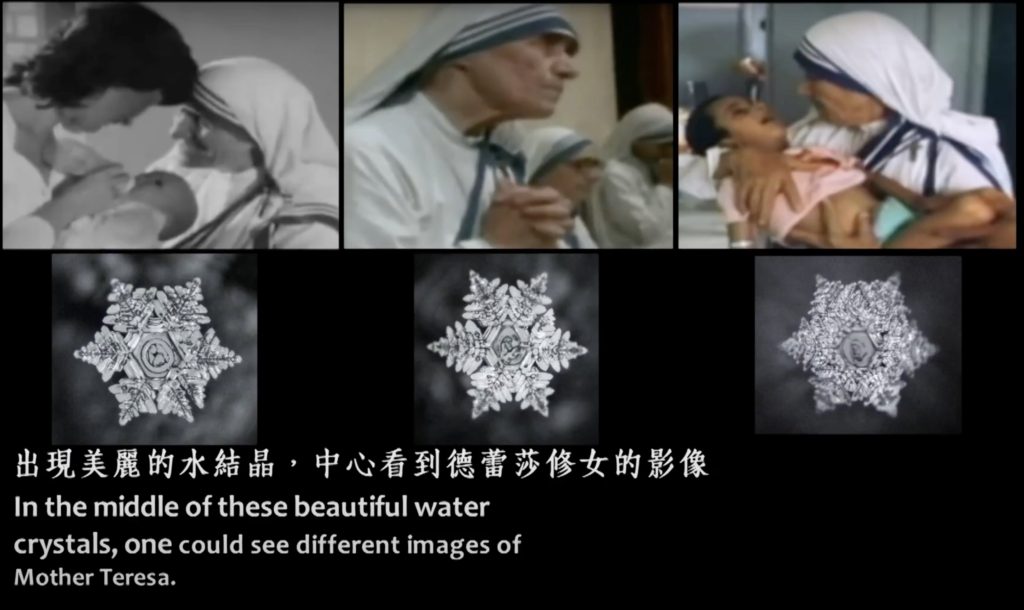 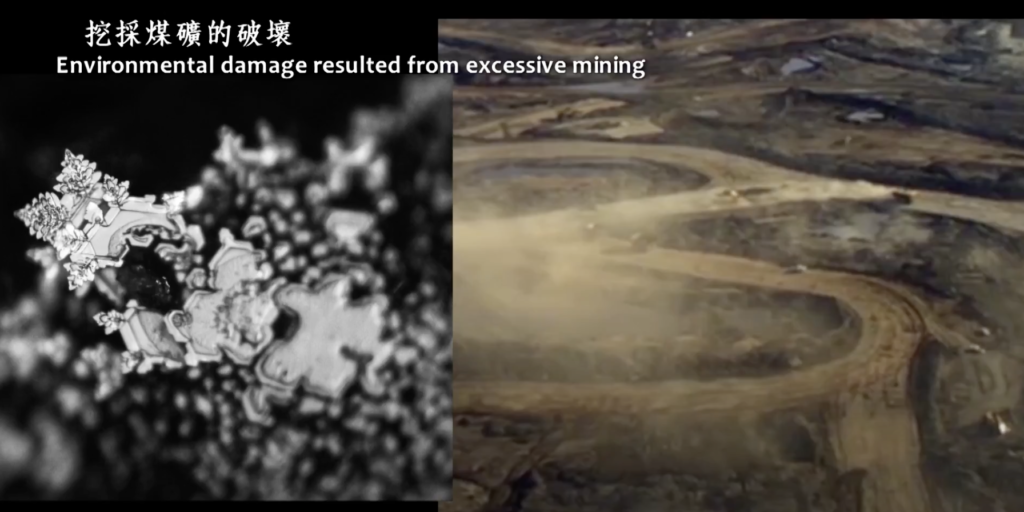 Going into the conference I wasn’t sure what to expect. Although I had previously lived in China and studied its language for several years, I was not familiar with its philosophical texts or classical Chinese language. China’s traditional culture emphasizes the same values we in the West care about: humility, harmony, benevolence, respect, loyalty, and integrity to name a few. I was not expecting to learn so much about the rich traditional Chinese culture and grateful to have been exposed to it now. By putting what is contained in the ancient Chinese wisdom into practice, we can create a more peaceful world.

The video I had been working on about the Thai king and Theravada Buddhism was not completed or shown at the conference. But my associates and I did create the video below, which describes what we learned at the conference.